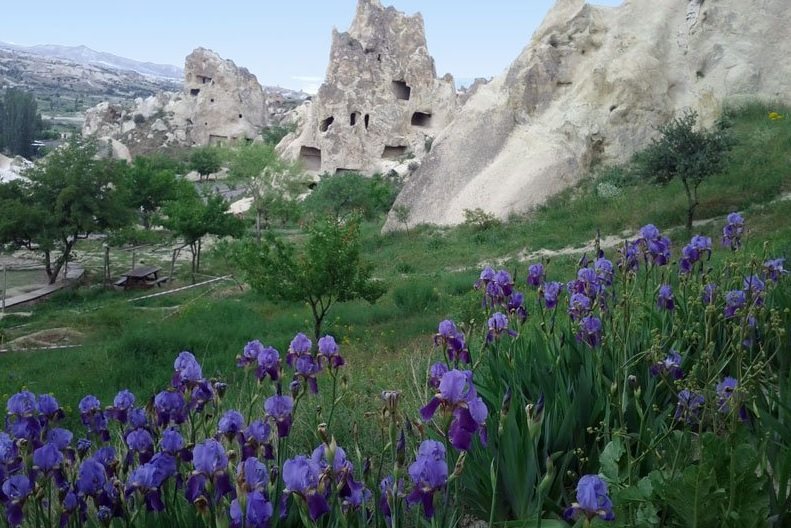 Where in the world can you still witness mile-wide crocus carpets, mountains smothered with snowdrops, and entire woodlands underlain by cyclamen?

Right here in Turkey. Not surprisingly, this country’s richness of species, including 13 snowdrop species (two endemic) and ten cyclamen species (six endemic), has led to commercial harvesting of bulbs from the wild and an international trade in bulbs.

Fortunately, Turkey has one of the best systems for balancing bulb collection from the wild with the conservation of the species in their natural habitats. In this sustainable-use programme, international trade in snowdrops and cyclamen is regulated by CITES (the Convention on International Trade in Endangered Species) because, without these controls international trade could threaten their survival.

This will develop a long-term economic alternative for villagers formerly involved in the collection, based on village-scale production and supply high quality flower bulbs to the international bulb market.

For over one hundred years, Turkey has been a source of flower bulbs to the international market.  During the 1970s and 1980s the scale of trade – based on wild collection by villagers from hill and mountain districts – escalated.  By 1986 over 70 million bulbs were traded annually, and many millions were simply thrown away as damaged or undersized.  Conservationists deemed this level of collection to be unsustainable for certain species, a view supported by anecdotal evidence from some of the collecting villages.  Holland represents the world centre of the trade in flower bulbs, with major markets in Western Europe, N. America and Japan.

The Turkish government introduced a programme to establish village-based propagation in 1992.  In spite of such initiatives, several snowdrops and cyclamen species are increasingly threatened with extinction and their natural habitats are at risk. The Turkish government has designated a number of these important sites as nature reserves. However, to ensure the long-term survival of these species and habitats, local communities have a vital role to play. Sustainable harvesting and propagation of these bulbs enforces the traditional role of the communities as guardians of the land and protectors of their livelihoods.             After a period of trials, commercial production was established in a village on the Mediterranean coast.  In 1993 the first seven village families became involved in a scheme to artificially propagate Galanthus elwesii, plus smaller numbers of Eranthis hyemalis and Anemone blanda.  These villagers were given material free of charge, provided that they were willing to grow them on for a full three years (in which time the small parent stock both increases in size and number), allowing both stock for marketing whilst retaining sufficient for replanting.  The first harvest in 1996 was a great success:  large bulbs were produced for the foreign market, the harvest event became an important village ‘social occasion’, with visiting dignitaries, and the project helped to put a remote and poor village on the political map.  By 1997, 160 village families have joined the scheme, a further two villages have also joined the scheme, and other NGOs have replicated the success of the project in other parts of Turkey.

Wholesalers and retailers have seen a decline in trade, and a threat (not catalysed by this project) to ban all imports of Turkish bulbs on environmental grounds means that Turkish exporters are willing to pay up to 2.5 times the price that they would pay for collected material. The Indigenous Propagation Project is a partnership project run by Doyal Hayati Koruma Derneyi (the Society for the Protection of Nature, DHKD, based in Istanbul) and Fauna and Flora International (FFI, Cambridge, UK).

From 1991 to 1997 the project was funded by World Wide Fund for Nature International, but since July 1997 has been receiving funding from the UK National Lottery. The project officer(s) work closely with at least some members of the Turkish export trade, formally through a Joint Steering Committee (DHKD is the Secretariat) and on an informal day-to-day basis, as necessary.  The traders themselves have been responsible for the formation of a Natural Flower Bulb Association which has been established by the trade to regulate their activities, promote their products, and to encourage research etc. to improve cultivation, propagation and post-harvest storage techniques.

The project is one of the very few where seemingly all parties are happy with the outcome.  The villagers get enhanced income (for no more work), the exporters/Dutch wholesalers are able to sell propagated bulbs to a market that is increasingly demanding non-wild collected material and the numbers of bulbs being collected from the wild is declining.

As a result, the species-rich high-altitude plateaux where these bulbs are collected remain a magniﬁcent multi-coloured sight in spring. The local people value this wonderful resource, which also helps to secure its future. But for species that aren’t currently propagated the future is still uncertain.