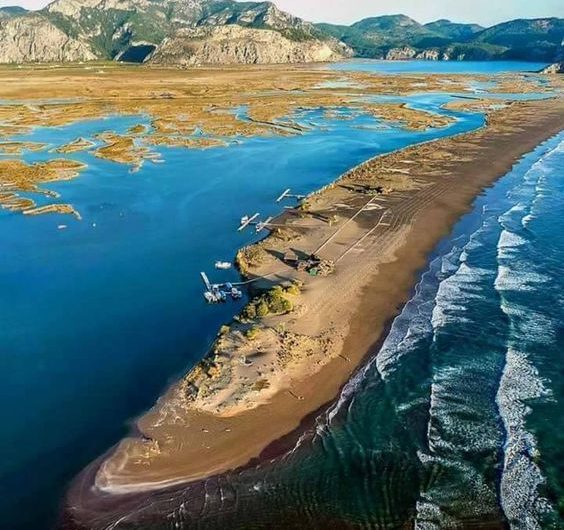 Dalyan, meaning of natural fish farm, is a truly “Eden on Earth” small town located in Mugla province of Southwestern Turkey. Unlike other busy nearby resorts like Marmaris or Fethiye, it is still not excessively developed and life runs at small pace. Dalyan town owes its preserved nature mostly to its millions of years old habitants Caretta Caretta (Logger Head) sea turtles as Iztuzu Beach and its surrounding areas are major breeding and shelter habitat in the life cycle of these endangered species.

Turkey in general had met with tourism only after various legislations and applications taken place since the second half of 1980s. Even major resorts such as Kusadasi, Bodrum and Oludeniz, which all are amongst the major destination for international tourism today, were only small towns, hardly receiving visits from international tourists before than. Up until 1986, locals used to own small huts called “baraka” on Iztuzu Beach, at the banks of Sulungur Lake and used them as small holiday homes during summer months.

When June Haimoff (Captain June), an English lady from Essex, mored her sailing boat at Dalyan that she had bought in Greece in July 1975 for the first time, she didn’t know she was entering a new world that she would never be able to give away. Between 1975 and 1981 June visited Dalyan and Iztuzu Beach several times and was therefore called “Kaptan June” (Captain June) by the locals. Finally in 1984 she decided to settle in Dalyan in her own baraka on Iztuzu Beach, which locals happily accepted her as their neighbours, not knowing she would change the fortune of Dalyan forever.

Living in her baraka, June met with Caretta Caretta sea turtles and she has become their protecting angel since than. From 1984 onwards there had been rumours about building a hotel and a marina at Iztuzu Beach. In October 1986, beach huts were removed and in April 1987 the rumours came true, when building of an 1800-bed capacity holiday resort started.

Knowing that this would destroy the habitat of Caretta Carettas, June Haimoff started a campaign against the development projects, which lead to establishment of  “The Kaptan June Sea Turtle Conservation Foundation” in 2011. Together with her fellow environmentalist such as David Bellamy, Lily Venizelos, Günther Peter, Nergis Yazgan, Keith Corbett and with the support of environmental protection organisations such as IUCN, Greenpeace, World Wildlife Fund and the Zoologische Gesellschaft Frankfurt, Captain June has succeeded in her efforts to stop the development and building of the hotel and marina at Iztuzu Beach.

With further efforts, the Köyceğiz-Dalyan region was declared Special Environmental Protection Area (SEPA) and since than Dalyan has become a popular holiday destination. Iztuzu Beach, stretching 4,5 kms long from the edge of Radar Mountain toward the delta opening where Dalyan River meets the Mediterranean is still home to Caretta Caretta Sea Turtles. Today, at the age of 92, Captain June still swims at Iztuzu Beach and she is very actively involved in environmental conservation and the protection of endangered turtles in Turkey.

“It was the most special moment of my life arriving at Iztuzu Beach,” reminisces June. “So enraptured was I with this magnificent sweep of sand and the delta lying behind it, that I wanted to throw myself upon the sand and embrace it like a lover.”