The shallow brackish waters of the Dalyan River, which has a bed of fine sand and mud, form the ideal habitat for the blue crabs attracting the attention of both nature lovers and gastronomes. These large flamboyant crabs, originating from America and Canada, have legs and pincers of dark blue, rust colour joints projections on either sides of their bodies, and paddle with rear legs. The blue crabs that were brought to Turkey for their economic value and released in lagoons in the Northern Aegean and the Saros Bay reproduced and multiplied. However, probably because they were not able to find the natural conditions they required in this region, they migrated to the Southern Aegean and inhabited the Güllük and Dalyan lagoons, extending right over to the Karadeniz fish trap in Taşucu. Today a large number of blue crabs are hunted in the Dalyan delta and are served by restaurants with various sauces and cooking methods.

As is the case with other crustaceans, blue crabs change their shell as they grow, and protect themselves against their enemies by burying themselves in the sand-mud bed or hiding under rocks until their new shell hardens. Male crabs may reach a width of 9 cm and a length of 22 cm. For this they moult their shells a few times throughout their 3-year life. In contrast, however, females are smaller and have different abdominal hoops. 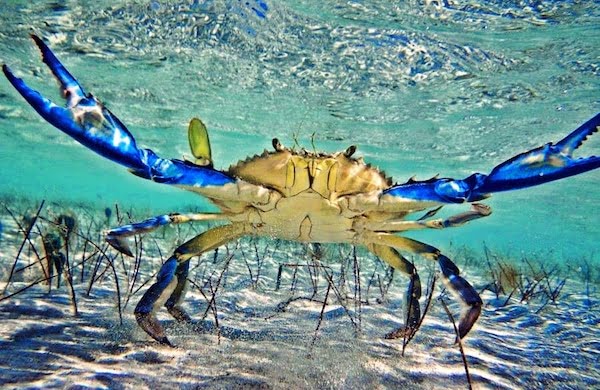 Female blue crabs can conceive only once after reaching sexual maturity. Their mating, which presents an interesting ceremony starts when the female blue crab releases a hormone in its faeces, which stimulates the male. The male crabs that compete for the female, the shell of which it has recently moulted and is still soft protect and carry the female. After this matrimonial ceremony where the toughest is the winner, the female stores the sperm and migrates to salty water after its shell hardens. During a period of 2-9 months following insemination, the blue crab secretes a sponge like orange hormone that fixes under its abdomen like a pillow and releases about 2 million eggs.

The eggs are protected by the female crab until the eggs hatch and spread into the water like a cloud of plankton. The development of the larvae, which are generally 0,25 mm wide, depends on saltiness and heat. The young, the width of which reach 2,5 mm in the shell formation stage, have the appearance of crabs, however with claws at the end of their legs; they prefer to live at the bottom although they are capable of swimming. At this stage the blue crabs gradually migrate to less salty water and mature by growing 1/3 of their current size at each moulting. Since male blue crabs prefer less salty water their migration may extend to upper parts of rivers.

For enthusiasts, blue crab hunting is very pleasant and profitable. A sinker and a piece of chicken skin or a dead fish attached to a largish hook is adequate. When the line you cast into the shallow water of the delta starts being pulled gently, you understand that the crab has taken the bait with its pincers. The only thing to do is to draw the line gradually without frightening the crab. Blue crabs are very stubborn and they do not let go of the bait until they reach the surface. However, it is necessary to put a net into the water to catch the crab as soon as it gets close to the boat. Another thing to be careful of is to avoid its large and strong pincers.

Should Blue Crabs in Dalyan Be Hunted?

Blue crab hunting has been a controversial issue that you can hear many different views and information from different people. Therefore we have made an extensive research to enlighten conservational, legal and ethical aspects of the issue:

Legislation Regarding Conservation and Control Measures

Turkey has been a member of the GFCM (General Fisheries Commission for the Mediterranean) since the 6th of April 1954. The country is not party to the UN Law of the Sea Convention and the UN Fish Stock Agreement of 1995. Turkey has not even ratified the FAO Compliance Agreement of 1993 and also the FAO Port State Measures Agreement of 2009

The main legislation governing the access to fisheries resources is the Fisheries Law No. 1380 and the Fisheries Regulation No. 22223 of 1995, which sets forth a licensing system for fishing vessels and fishers.

According to national laws and regulations of GFCM, blue crab fishing in the Mediterranean and the Aegean seas are banned between May 1st – November 1st. However general fishing regulations do not apply to Dalyans (Natural fish farms on rivers opening to the sea) These regulations are managed by the local authorities.

Although fisheries management plans have been prepared by the Ministry of Development, these have not enforced yet. Fisheries generally is regulated through technical regulations.

According to the report of FAO‘s (Food and Agriculture Organization of the United Nations) most recent report, The Mediterranean and Aegean lagoons host a large population of the blue crab, Callinectes sapidus. At present, it is not exploited because demand for it collapsed after the closure of the only processing plant for crab meat, located near Karatas. Its abundance now represents a pest for the fishing industry since the crabs enter the fishing installation and damage the fish, thus lowering their commercial value.

Its know that THE KAPTAN JUNE SEA TURTLE CONSERVATION FOUNDATION has had efforts to enforce laws agains fishing blue crabs, mostly because crab hunters use blue crabs to feed sea turtles to attract tourists  to their boats to sell cooked blue crabs. Captain June foundation, very rightfully, emphasizes the new legislation now in force in the republic of Turkey – The Animal Protection Law – sets out the basic principles concerning the protection of animals and their wellbeing. Clause 4(e) states – “The protection of endangered animal species and their natural habitat together with their natural lifestyle is an essential fundamental.”

Does Turkish Citizens or Tourists Need a License for Amateur Fishing?

Turkish citizens and foreigners who will catch fish for non-commercial or sportive purposes with small scale gears in the areas where fishing is not prohibited are not obliged to get a fishing licence. The matters concerning the methods and principles of this type of fishing are arranged by a regulation.

By Turkish law and local regulations, supported by the international environmental agencies reports, its ok to fish blue crab within the boundaries of Dalyan lagoons. However, it not ok to use the blue crabs to feed sea turtles. You can sign the petition here to support Captan June foundation to stop Sea Turtle Feeding.

You can experience blue crab hunting on our Noon to Noon Boat Trip but its important to note that once they are caught, we release them back to nature

Spend an amazing evening on our brand new boat enjoying the best of Dalyan, sunset at iztuzu beach with an
5.00 / 6 reviews
£ 30.00
per person
view tour
7 hours
Yes
All Ages