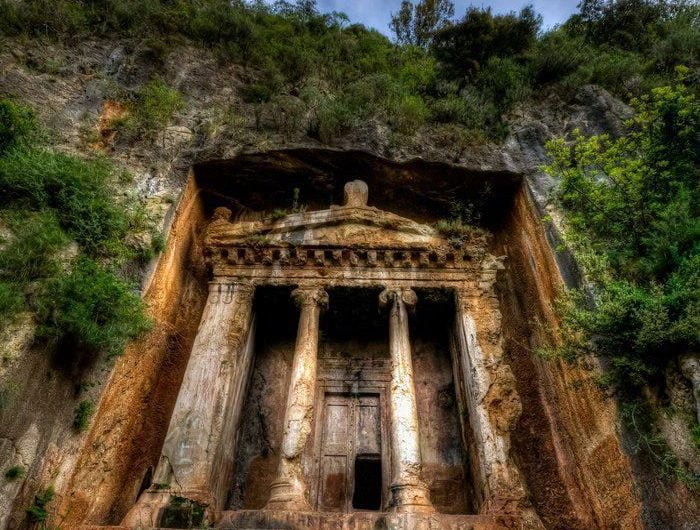 After Turkish tribes invaded all the Christian lands to the north of Caria in the 1300s, Caunos experienced a severe population decline resulting from the economic implosion of maritime trade. Additionally, a malarial epidemic brought the city to its knees and it was finally abandoned. When the ancient city was heavily damaged by earthquakes, it was covered with earth that then grew a dense vegetation, hiding it from view. Eventually two new settlements budded within the vicinity. Turks settled here in what is now known as Çandır, the forest-covered hillside right outside Caunos’ walls. The nature-loving Yoruk people of Çandır village which is still inhabited, safeguarded Caunos’ ruins.
The settlement that was founded on the east shore of the river and across from Caunos’ Acropolis, was referred to as Calbis in antiquity. It gained great importance as a harbour in the river trade between the Köycegiz Lake and the sea after the 14th century The prosperity brought on by fishing and agricultural production in this fertile alluvial plain lying just behind the town, accelerated its growth and development. The large fish traps installed by the inhabitants of Caunos on the Calbis river and most probably at the entrance of the Sulungur lagoon, continued to exist after the Turks came. Consequently, it caused both the river and the town to be called “Dalyan.”

Source: THE HISTORICAL CONNECTION FROM CAUNOS TO THE ÇANDIR VILLAGE AND THE TOWN OF DALYAN, (pages: 73), Altan Türe, 2011, Faya Kültürel Yayınları