Early Bird Limited Time Offer: 20% off on all tours until end of February.
Offer can not be mixed with any other discounts / coupons / vouchers.

Köyceğiz Lake is situated between the small towns of Dalyan and Köyceğiz. It is the second largest coastal lake in the Aegean region and ıs formed in a deep depression, surrounded by mountains. To the south side of the lake, there is a fault line bordered by the Sultaniye and Rıza Çavuş sulphurous hot springs and mud baths. There is another thermal water spring in the centre of the lake which releases sulphurous waters directly ınto the lake. The presence of these thermal springs and the depth of the lake (20-60 metres) are indicators of continuing seismic activity. The lake is fed by the Namnam and Yuvarlakçay rivers and a number of mountain brooks. The water from brooks melt water and fresh water springs, mixes with warm sulphurous water that is released from a fault and the brackish, oxygenated water that flows upriver with the rising tide. Due to the two-way flow from and towards the lake the water of the lake is brackish. (Fresh and salt) Due to the thermal water flow the lake is rich in minerals

and contains a wealth of plankton to provide nutrition for freshwater fish and the sea fish that swim upriver to spawn.

The lake has evolved into an ecologically important area with vast marshy forests of the endemic Turkish Sweetgum (Liquidambar Orientalis) The species primarily occurs in the province of Muğla, near Marmaris and in the Köyceğiz-Dalyan SEPA. The small wetlands around the lake are interesting because of their birdlife. The area is also rich with reptiles (tortoises, turtles, terrapins, snakes) and insects (dragonflies, damselflies). The lake flows out into the Dalyan Channel, which then passes the village of Dalyan and the ancient city of Kaunos before it reaches the labyrinth of reed beds and the Big Fish Trap that gives access to Çandır and the Delta. Through a narrow passage referred to as Boğaz (literally translating as throat) it then flows past İztuzu Beach into the Mediterranean.

The name Köyceğiz means small village. It probably refers to the small number of buildings that remained after the Menteşe stronghold was flooded in 1867. After the flood most of its inhabitants moved to the new town of “Yüksek Kum” (= High Sand) founded by the rich Menteşe landlord Ali Rıza Pasha 5km away. The landlord had made a fortune growing cotton and exploiting chromium mines and could afford building a new town with a certain grandeur. After a while the town was renamed “Köyceğiz”. 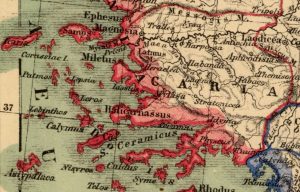 The Anatolian beylik of Menteş (1260–1424), with its capital city at Milas in southwest Anatolia and headquartered in Beçin castle near the city, was one of the frontier principalities established by the Oghuz Turks after the decline of the Seljuk Sultanate of Rum. The beylik (domain of a “bey” or tribal chieftain) had come into existence by 1290 and was named for its founder, Menteş Bey.

The heartland of the beylik corresponded roughly to ancient Caria and also to the early modern Muğla Province in Turkey, including the province’s three protruding peninsulas. Among the important centers within the beylik were the cities of Beçin, Milas, Balat, Elmali, Finike, Kaş, Mağrı (Fethiye after 1911), Muğla, Çameli, Acıpayam, Tavas, Bozdoğan,Çine and, of cousre, Dalyan and Köyceğiz.

The city of Aydın (formerly Tralles) was controlled by this beylik for a time, during which it was called “Güzelhisar”; it was later transferred to the Aydinids in the North, who renamed the city after the founder of their dynasty.

The beys of Menteş were serious regional naval powers in their time. They also left important works of architecture, such as the Firuz Bey Mosque in Milas and İlyas Bey Mosque in Balat.

Menteş first submitted to Ottoman rule in 1390, during the reign of Bayezid I, “the Thunderbolt”. After 1402, Tamerlane restored the beylik to Menteşoğlu İlyas Bey, who recognized Ottoman overlordship in 1414. A dozen years later, in 1426, Menteş was definitively incorporated into the Ottoman realm. 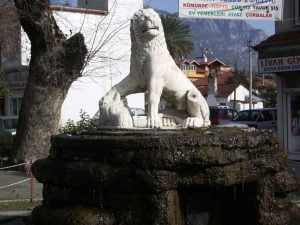 The present-day Muğla Province of Turkey was named the sub-province (sanjak) of Menteşe until the early years of the Republic of Turkey, although the provincial seat had been moved from Milas to Muğla with the establishment of Ottoman rule in the 15th century.

“New” Köyceğiz still has a number of elegant historical buildings dating back to the 19th and early 20th century. Most are found around the square which is situated behind the restaurants and bars lining Köyceğiz’ boulevard. The square also prides the “Lion of Kaunos”, a statue that was brought to Köyceğiz in the mid 1960s after illegal excavations at the historical site of Kaunos. The Lion is also found in the Köyceğiz municipality emblem.

Pam Smith
Reply
Thanks for that Rachel - really interesting. I shall seek out the Lion of Kaunos next time I go to Köycegiz ( once I've worked out how to pronounce Köycegiz that is)!